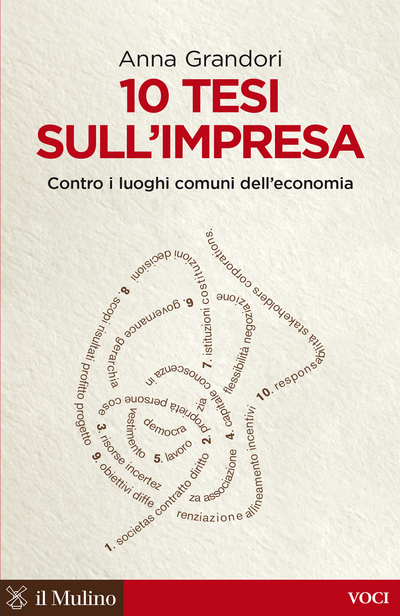 The debate over the causes and solutions of the persistent economic crisis has focused mainly on macro-economic topics: more or less taxation, more or less “free” markets and flexibility, more or less financial market regulation. But no market, no “game” works if the players go mad. How does one go about obtaining good players? Good players cannot exist if the institutions that shape them are poorly designed. And, undoubtedly, businesses are among the most important players. In this brief, argumentative, non-conformist text, Anna Grandori defends the view that we are currently experiencing a crisis of business enterprises, not only of markets. Her thoughts on the nature, the organization and the governance of businesses are summarized in ten theses, presented in opposition to ten clichés; the former contradict the latter and need to replace them. An excessively large part of the debates concerning the need for reform reeks of the above-mentioned clichés, which exert a surprising degree of influence even among actors that have the power and the duty to change things: representatives of government, parties, businesses, labour unions. It’s time to make things clear.

Anna Grandori teaches Business Organization at the Luigi Bocconi University in Milan, is co-editor of “Organization Studies” and chief editor of “Journal of Management and Governance”.